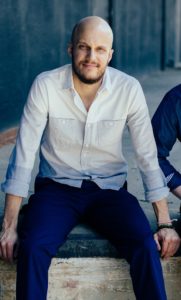 Canary Red founder, Russell McLaughlin, is a composer/songwriter, sound designer, multi-instrumentalist, and music producer from Atlanta, GA. A graduate of Berklee College of Music in Boston, Russell is a full-blown devotee to the world of music; specializing in performance – both live, and in-studio – and composing original scores and sound design for animation, radio, & other visual media.

In addition to career-long artistic pursuits as a bandleader and solo artist, he has also dabbled in numerous other mixed-media creative endeavors – specifically in the field of scientific visualization – which led to the founding of Canary Red.

Russell provides a full suite of services including:

Friend, music student, colleague, and mentor – James Archer, of AnatomyBlue – was instrumental in Russell’s foray into medical animation, after the two collaborated on several projects together.